Posted on February 3, 2015 | Comments Off on Document: #Louisiana Maneuvers Agreement 1941

My father was going through some personal things and stumbled across this document.  He isn’t sure how it wound up in his possession, and after asking many family members it remains a mystery.  The document doesn’t seem related to property owned by our family. 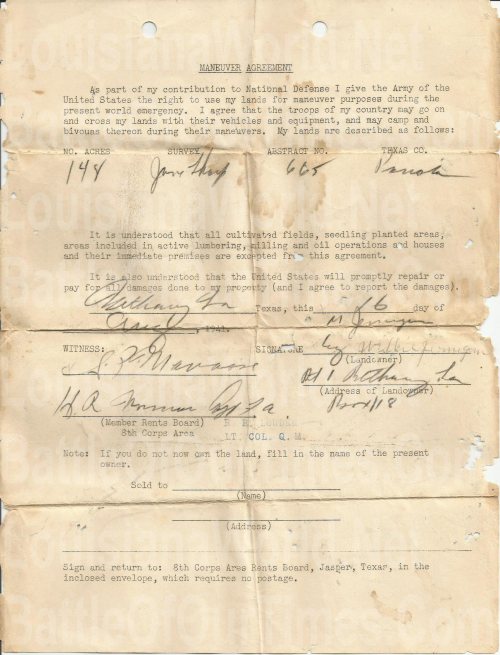 He is considering donating the document to a museum.  We have a Louisiana Maneuvers Museum here locally and that could be a great possibility.

He would like more information before making a decision.  The property owner on this document was in Bethany, Louisiana/Texas Caddo Parish/Panola County near the state line.

It rained on Monday morning Sept. 15 over all Louisiana. From low, darkening clouds the drops spattered on the State’s good highways, on its hundreds of marshy mud roads, on its pine forests, and on its deep swamps full of quicksand.

The rain fell, too, on 350,000 U.S. soldiers and 50,000 U.S. Army vehicles as they fought the greatest sham battle in U.S. history. The attack had come before dawn. With two fast-moving, hard-hitting armored divisions leading the way, Lieutenant General Ben Lear, commander of the Second (Red) Army, had pushed his troops across the muddy Red River, was already sending long tentacles down the highways to the south, where Lieutenant General Walter Krueger’s Third (Blue) Army lay in wait. Overhead, armadas of pursuit planes fought great dogfights, while sleek A-20A attack bombers and Navy dive bombers strafed the columns of tanks and trucks moving up to the front.

The mock battles of what became known as the Louisiana Maneuvers had one purpose: to prepare America’s soldiers for the war that had already begun in Europe and was threatening to spread around the world.