Terry Speaks, a suspect in the June slaying and dismemberment of Bourbon Street dancer Jaren Lockhart, was sentenced in a North Carolina courtroom on Thursday to serve two years and eight months in federal prison for failing to register as a sex offender, his attorney said. Speaks pleaded guilty to the charge after authorities arrested him in Louisiana, according to his private defense attorney Alan Doorasamy.

“He couldn’t leave the middle district of North Carolina without letting his probation officer know, so he had no defense to that” charge, Doorasamy said.

A woman suspected in the death of a New Orleans dancer has been released from the Tangipahoa Parish Jail. WDSU-TV reports Margaret Sanchez bonded out of jail late Friday, shortly after the parish district attorney refused a charge of harboring a sex offender — the most serious count she faced.

One of the suspects being investigated in the death of a French Quarter dancer’s death and dismemberment has been extradited.

Some of the evidence in the investigation surrounding a Bourbon Street dancer’s disappearance and gruesome death has been taken to FBI headquarters, investigators told WDSU.

Margaret Sanchez, 28, who has been named along with Terry Speaks as a suspect in the gruesome murder and dismemberment of Jaren Lockhart, was charged on Monday evening with harboring a sex offender, said Tangipahoa Parish spokeswoman Dawn Panepinto.

Margaret Sanchez, a suspect in the murder of Jaren Lockhart, has been moved to Rosenblum Mental Health Center in Hammond

Sanchez is being moved for a psychiatric evaluation. More details at on the Eyewitness News at 5 and 6 p.m.

Deputy Chief Don Bass with the Hancock County Sheriff’s Office said they are checking nearby businesses along the Mississippi coast in an attempt to get a break in the case.

Sanchez did not waive extradition, which means she will fight to avoid being brought to Mississippi where investigators wish to question her.

Speaks was arrested and charged with failing to register as a sex offender after he was convicted of a sex crime involving a juvenile in North Carolina in 2003. He remains in the St. Tammany Parish Jail until his scheduled court appearance on Friday morning.

Jaren Lockhart’s family speaks out for the first time

A mother is shaken to her core and a father is numb after living through the unthinkable for any parent: the gruesome death of a daughter. Lockhart’s dismembered body started washing ashore late last week on several Mississippi beaches.

“Everybody says be strong, but it’s hard to be strong,” Donna added.

“It’s like someone just ripped your heart out of your body, you know,” explained Pete Singer, the victim’s father. “You just go numb. You go dead on the inside.”

Her brother, Lance, who Lockhart lovingly called “Bubba,” said the worst part for him is he couldn’t be there to protect his little sister like he’s done all his life.

Man in Lockhart investigation ordered to be moved to North Carolina

NEW ORLEANS – A surveillance or security video shows murder victim Jaren Lockhart with Margaret Sanchez and Terry Speaks in Mississippi at a point in time after a video showed the three of them leaving a Bourbon Street strip club together, according to the Hancock County Sheriff’s Office.

Word of the new video by the sheriff’s office comes as the investigation into the murder of Lockhart, a New Orleans woman whose body parts were found on Mississippi beaches, continued Thursday with a court appearance by Sanchez, one of two people described as a suspect in the case.

The new video hasn’t been released yet.

Unreleased Video of Couple with Lockhart in Mississippi

Investigators have said that Sanchez and Speaks were known to some who frequent the Quarter, but they were generally not viewed as threatening.

Sheila Nand, a dancer at Stilettos, which is next to Temptations, said the couple stopped into her club the same night Lockhart disappeared.

Sanchez approached Nand as she danced on the club’s stage, tipped her and asked if she would leave the club to join her and Speaks. Sanchez told Nand she looked like another girl that she had previously taken home, according to Nand.

“She looked at me kind of goo-goo eyed … and asked me if I would go home with her,” Nand said. “I want a treat for him,” Nand said Sanchez told her.

Nand said she declined the offer but spoke with the couple after she was done dancing. Speaks, whom she recognized as a doorman from nearby businesses, said hello but remained largely silent, Nand said.

Sanchez then changed her request, Nand said, asking the dancer to leave the club with the couple to “work” a small gathering somewhere in the city for $700. Again, Nand said, she declined.

Nand said she went to the dressing room but later found Sanchez waiting outside the door. Sanchez then asked Nand if she had any drugs. When Nand said she had none, Sanchez tried to make small talk with the club’s manager, possibly in an effort to gain Nand’s trust, Nand said.

When that effort failed, Sanchez returned to Speaks, and the two left.

“I didn’t really have any clue what those two are into,” Nand said.

Authorities told WDSU that Speaks was in the custody of U.S. Marshals, but will be returned to Tangipahoa Parish Jail. Sources said a news conference would likely be held later in the day.

Police said the arrested woman is Margaret Sanchez, who is 28 years old.

Police said the man has used many aliases across the country. He was arrested under the name of Terry Speaks. He is 39-years-old. 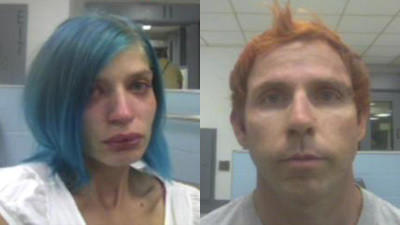 “I am working every day toward my legacy. It has error but each mistake has been priceless to the journey. I wouldn’t exchange my past experiences for the world. They are what have shaped me. Every trial, every struggle, every heartbreak, every broken dream, every crushed hope, every loss, has helped me grow mentally and spiritually. Were it not for my crazy messed-up life I would not have all the life experiences that I have. I would be naive. I would be unprepared to face the world. But I have become strong, independent, and more determined than I ever would have been with a perfect life. It is the hardship I have faced and the pain I have been subjected to over the years that makes me strive harder to beat the odds and break free from the chains society says I am bound by. I will never fall into the same footsteps. I am my own person. I am not the product of anyone else’s doing. If you think you can judge me think again. Because I am nothing you have ever seen before. I am me.”

The Hancock County Sheriff’s Office has identified the dismembered body found on Mississippi beaches as that of a missing New Orleans woman.

“We have identified her as the missing woman from New Orleans [Jaren Lockhart] based on the recovered limbs,” Glenn Grannan, Chief Investigator, said. “A limb was discovered by a fisherman this morning. We mobilized a search effort with the Harrison County Sheriff’s Office and the Hancock County Sheriff very quickly. During the search we recovered the additional limbs as well as the head.”

The torso of Jaren Lockhart was first discovered on the Mississippi beach in Bay St. Louis on Thursday by a cleaning crew.

The head, arms and legs had been removed from the body and there were stab wounds to the chest.

Preliminary forensics revealed that the limbs had been intentionally removed and that the torso washed ashore.

‘We know she made it to work and left in the early morning hours,’ Grannan said.

He said there is some surveillance video showing her leaving the club. He would not go into detail about who she left with.

Lockhart’s stabbed torso turned up in Bay St. Louis, Mississippi, on Thursday followed by the discovery of her head and part of her legs two days later

Margaret Sanchez, 28, who has been named along with Terry Speaks as a suspect in the gruesome murder and dismemberment of Jaren Lockhart, was charged on Monday evening with harboring a sex offender, said Tangipahoa Parish spokeswoman Dawn Panepinto.

Margaret Sanchez, a suspect in the murder of Jaren Lockhart, has been moved to Rosenblum Mental Health Center in Hammond

Sanchez is being moved for a psychiatric evaluation. More details at on the Eyewitness News at 5 and 6 p.m.