Posted on March 14, 2015 | Comments Off on Historians ponder future of Revolutionary War relic 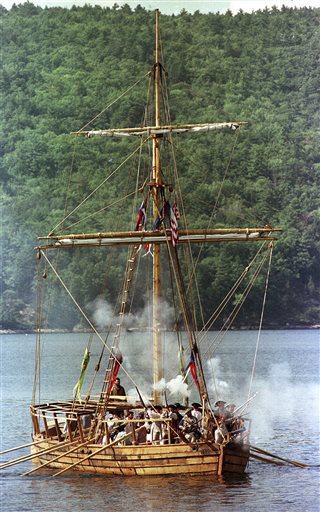 FILE – In this Aug. 18, 1991 file photo, a replica of the Revolutionary War gunboat, the Philadelphia, fires guns during its launch on Lake Champlain in Vermont. A similar gunboat, the Spitfire, has been on the bottom of the lake since it was sunk in 1776 during the Revolutionary War, while being used by Benedict Arnold to help hold off the British in the key naval Battle of Valcour Island. Historian Art Cohn is developing a management plan for the future of the Spitfire, fearing the possible threat of an invasive species that could destroy the wreck if it is not raised and preserved. (AP Photo/Craig Line, File)